skip to main | skip to sidebar

Education is [obviously] good for us, but i had not expected how much work it would create for me.

When i retired two years ago, i started classes at the community college in Horticulture, and have loved every minute.  I've learned a lot of the how, what and why that was missing from the informal education provided by my grandmother and my favorite aunt.  And, it's been practical.

After I finished "Woody Plants", i started adding new shrubs to the landscape - viburnums, rhododendron, oakleaf hydrangea, panicle hydrangea, choke berry and conifers.  After i finished "Irrigation" i put in an above-ground watering system for the back perennial beds.  After "Perennials" i started reworking those beds - moving things around and adding new plants ... like a whole shade garden.

And, now i'm in "Planting Design".  This is where i wanted to start, but there are so few of us interested* in landscape design right now, that this is the first time in three fall semesters that there have been enough students to meet the minimum to hold the class.  Two weeks into the semester i started looking at my front yard with new eyes.

I realized that we had a "weak" front entrance and that the foundation planting that we did more than 15 years ago has matured and grown a lot bigger with the result that it was beginning to take over.  In particular, the English Laurel [Prunus laurocerasus 'Otto Luyken'] was enormous, with one bush covering more than eight feet laterally.  There was no focus to the front.

First, I tried to prune the laurel back and open up the space.  That was my day job.  And, at night i worked on a new plan for the front.  What i would really like to do is rip out the walkway [too narrow, too close the the porch, too boring] and put in a whole new walk and 'resting place' at the bottom of the stairs, but that will take a major investment in time and money, as well as several strong men who know what they are doing.  So, i settled for creating a more obvious entrance and softer planting.


I pruned the laurel until it was effectively removed and then called our "tree man" to come take out the stump.  Then a morning of pulling out lireope, various vines, and hidden weeds left me with a clean surface to start on my new plan.

A trip to my new favorite nursery yielded three new  apricot "drift" roses** and a Hinoki cypress [Chamacypris obtusa 'Gracilis'].  Add a couple of bucketfuls of ajuga pulled from the back beds and i was ready to plant.

Finally, with a couple of bags of mulch and a good watering in, it was done.  Total working time was only four mornings over less than two weeks. 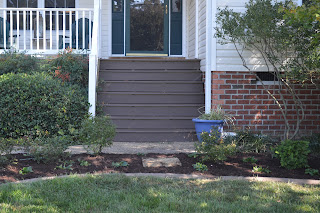 Maybe someday I will do the more expansive renovation and relocate the walk, but if i never do that, at least we have a more welcoming front entrance now.

I hate to think what else i will decide needs changing by the end of the semester!

* The community college offers three two-year tracks in Horticulture:  sustainable agriculture, turf management and landscape design, as well as a one-year certificate in flower arranging.  Currently the 'sus-ag' is the most popular with students.  Apparently, most of the landscaping and maintenance firms in the area are becoming very concerned about sustainability and our students can bring a lot to the table for them.

** If you are not familiar with "drift" roses, they are a spreading rose that is similar to the better know "Knock Out" series, but smaller.  They grow about 18 inches tall, with two-inch blooms and spread like a tall ground cover.  I have seen them in red, pink, white, yellow, coral and apricot.  I planted some in the spring, more in the early fall, and three this week.  So far, i really like them.
Posted by webb at 4:31 PM

View from the Garden Bench

webb
What could be nicer than watching the seasons come and go in the garden. I hope to retire in about three years and spend more time just digging in the dirt. I'm not a professional gardener, but enjoy putting my hands in the dirt and seeing what happens. For now, let's enjoy it together!